The Lightning Network (LN) is a prominent Bitcoin scaling solution that uses payment channels. Channel probing is inference of supposedly non-public balances of honest users in the LN. Channel probing is a big threat to user privacy in the LN. An attacker might want to infer channel balances for several reasons: to spy on payments, to learn business operation details, to optimize other attacks (e.g., network split via jamming), etc.

Even though probing has received some attention over the last couple of years, the understanding of this attack is still quite limited. Prior work makes assumptions that don’t hold well in practice, thus it is hard to understand from the existing literature whether probing is really feasible (what’s the cost of the attack) and what are the best ways to combat it.

We believe that ignoring parallel channels is one of the biggest shortcomings of the prior art. In our work, we expand the existing model of the LN with parallel channels, and advance the understanding of attack optimizations. We suggest a wide range of countermeasures (both aware and unaware of parallel channels) and evaluate the feasibility of the attack. Using our novel LN simulator, we demonstrate that our countermeasures bound the attacker’s information gain at 30% while making the attack 2-4 times longer.

We assume that our readers have a basic understanding of how the Lightning Network operates. Channel probing involves sending fake payments (with random hashes) via a target channel. We refer to such payments as probes. Probes might result in the following outcomes: 1) “Invalid hash” error signed by the probe target, when a probe successfully reached the target; 2) “Insufficient amount” error signed by the second-last node in the route; 3) A failure somewhere along the route (e.g., “insufficient amount” on the non-last hop).

For a balance of a given target channel, the attacker maintains a lower and an upper bound. The attacker picks a probing amount between the current bounds and sends a probe. If (1) is returned, then the lower bound of the target channel is updated with the chosen amount. If (2) is returned, then the upper bound is updated. In case of (3), an attacker has to find another route. Note that even in case (3) the attacker may update the bounds for channels before the erring one, and use this information to optimize the attack. The attacker repeats probes with new balance estimates until the target precision is reached.

In practice, “sending payments via a target channel” is not possible. The sender can only specify an ordered list of nodes that form a payment path. Routing nodes are free to choose any available channel to reach the next node in the route (this is called non-strict forwarding). Thus, if the target channel is not the only one between nodes A and B (in other words, if parallel channels exist), the attacker can’t guarantee that the payment went through the target channel. The attacker can’t even tell through which channel the payment actually went. We will talk about these challenges in more detail in Section Challenges.

Completely mitigating channel probing is probably impossible due to the nature of the LN. However, it’s possible to make it very inefficient. The relevant metrics are:

Even though inference of balance of a particular channel might itself be interesting, an attacker might also want to infer payments of a particular node (or between two nodes), or infer the full balance of a victim, or do something else. For these scenarios, probing is just a building block.

In our work, we focus on channel probing in general, without going into much detail about particular attack aims or scenarios. We achieve generality by a) having a general attack success metric (see Attack model), and b) evaluating it against 100 random targets nodes in the simulated network (see Evaluation).

While being generic, we understand that an attacker might be interested in two observations: 1) the maximum amount that can be forwarded between two nodes; 2) the balances of individual channels (of a victim, or between two nodes).

For (1), parallel channels are irrelevant, and an attacker can be unaware of them. However, (1) is often insufficient for an attacker, and (2) is required, for example, to detect payments flowing between two nodes. But (2) can be properly inferred only if the attacker is aware of parallel channels.

Parallel channels are allowed by the specification (although one of the implementations, c-lightning, running on approximately 11% of nodes, is not planning to support them). As of December 2020, the LN contains 21% parallel channels that hold 45% of the network’s capacity.

Challenges in spying on parallel channels

Consider the following example where an attacker Eve is trying to infer balances of channels C1, C2 between Alice and Bob.

Due to non-strict forwarding it’s up to the routing nodes to choose which channel will be used for routing. By default, routing nodes will make best effort to route a payment to earn fees.

In this case, it’s impossible for an attacker to infer balances of channel C1 which has both smaller balance and smaller capacity than C2. An attacker would only be able to infer that channel C2 has 3 coins on both sides, and that’s it. Even though the attacker knows it can’t possibly reflect C1 (because the capacity there is public and equals to 2 coins), an attacker can’t do much without advanced techniques like those we suggest in Attack optimizations.

Prior works would either get meaningless results (by claiming that channel A has more balance than its capacity), or only achieve very limited information gain (by ignoring many parallel channels).

We now demonstrate how the inference strategy should be adjusted in the light of parallel channels.

In our work, we introduce a notion of a “hop”, which is a set of all channels between two nodes, with estimates of their bounds.

We propose an attack strategy that keeps track of both hop bounds and channel bounds. At every probe, the attacker applies the new estimate to the hop as a whole. Additionally, if the attacker can deduct that the probe went through a particular channel, channel-level bounds are also updated. (Currently, we ignore cases where an estimate applies for a subset of channels.) Then, every new probe makes the best effort to infer as much knowledge about target channels as possible.

Consider a channel between Alice and Bob with capacity 1023. Ignoring fees, channel reserve, and in-flight payments for simplicity, Alice’s balance can take any value between 0 and 1023 - a total of 1024 possible values, which would require 10 bits to encode (the initial uncertainty). After one probe, the attacker learns that Alice’s balance can only take values from 0 to 511, gaining 1 bit of information and decreasing the uncertainty to 9 bits.

The attacker may only wish to learn the balance up to a certain granularity. In the above example, the granularity is 1 satoshi. For the granularity of 256 satoshis, the initial bounds (0 - 1023) only correspond to 2 bits of uncertainty (the interval 0-1023 contains 2^2=4 “buckets” of 256 values each). We refer the reader to the paper for the exact (rather simple) formulas for uncertainty.

Having defined the attack and the metric to evaluate its success, we implement it in a simulator which models the probing process using the algorithm described above.

Multiple simulators have been developed for the LN. We believe that our simulator improves upon the state of the art in the following ways:

Another advantage of our approach is that we model the network itself and the user (in our case, the prober) separately. The simulator takes as input a network snapshot obtained from an LN node. Based on the snapshot, the simulator creates different graphs to represent the real network and the attacker’s view of the network (including the information obtained from probing). Such modularity allows for implementing other, more complex attack scenarios, for example, those with multiple probing entities, or with honest users’ payments.

The simulator is extendable, one can change the probing parameters and plug in other path-finding algorithms, amount selection algorithms (besides binary search), etc. We plan to release the simulator under an open-source license.

Now, the goal of honest users, routing nodes, and stakeholders of the LN is to reduce the information gain of an attacker.

Since probing is based on sending fake payments and observing the resulting errors, we came up with three error-related ideas:

Each countermeasure may be applied with some probability or under some conditions. We assess how these countermeasures (separately and in combinations) make attacks longer and limit the attacker’s information gain. Our experiments are summarized in the following graph, where we plot the attacker’s information gain (as percentage of the initial uncertainty) as it accumulated throughout the simulated time of the attack. 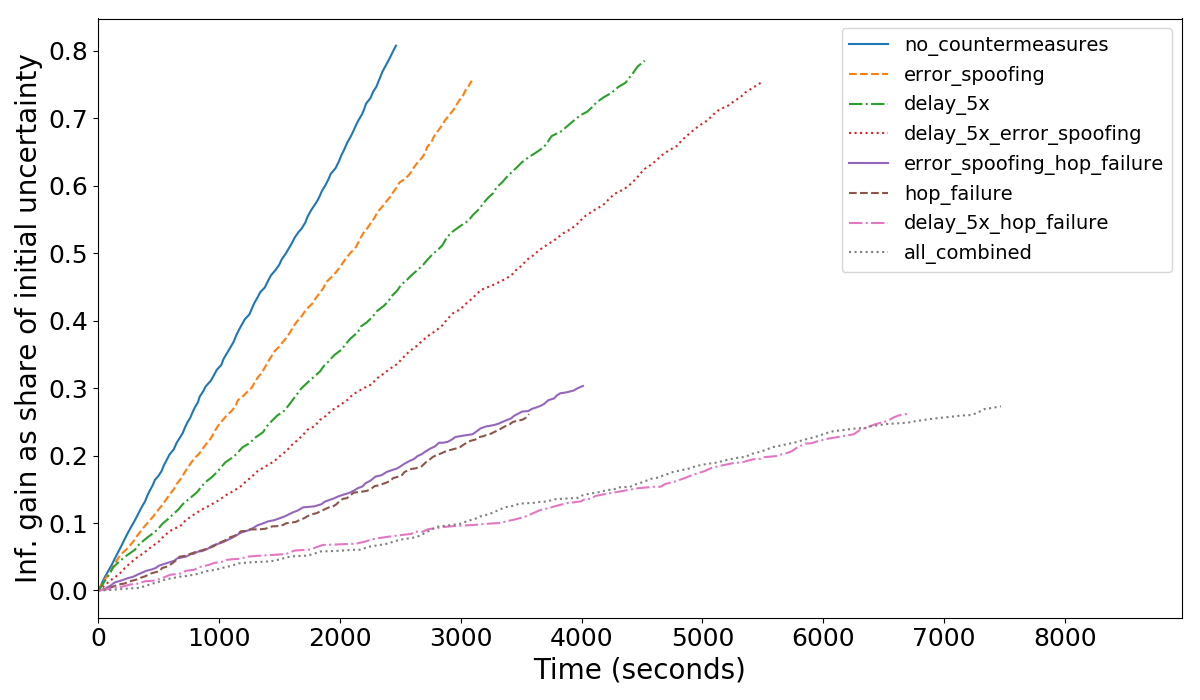 Each line represents one attack (the results are averaged across 10 simulations). All lines start from 0, indicating that at the start the attacker only knows public channel capacities. For the attacker, steeper lines are better (information is collected faster). As expected, the line without countermeasures is the steepest.

Each countermeasure alone is less promising: error delays and error spoofing can only make the attack about 2-3x longer than the baseline, and other combinations don’t yield better results than those mentioned above. For more detailed analysis, please refer to the paper.

Countermeasures come at a cost though. To understand the cost, we first note that honest LN users score routing nodes based on their historic reliability. Reliable nodes are prioritized for route construction. The drawbacks of the countermeasures described above are:

In the paper, we briefly discuss the tension between usability, incentives, and privacy. Some trade-offs might be acceptable.

We also suggest other potential countermeasures without an in-depth analysis of their performance:

Even if a hypothetical attacker is aware of parallel channels and tunes the inference engine accordingly, it turns out that in many cases it’s still impossible to infer all channel balances within a hop (e.g., the example in Countermeasures), because an attacker can’t easily choose through which channels the payment goes.

In our work, we also explored how an attacker might use channel jamming and channel policy discrepancies to overcome the issues with probing parallel channels. These are currently important unsolved issues of the Lightning Network, so it’s fair to assume they will be relevant for a while.

It turns out that, in many cases, using either one of those techniques indeed allows an attacker to choose through which channel the payment will go, and thus, reliably probe specific channels. We verified this against our own real LN nodes.

With jamming, an attacker has to jam certain high balance channels (probably after probing them), to reach the previously inaccessible channels. With attack enhancements based on fees and other policies, an attacker can craft probes so that a victim forwards them only over a channel from a specific subset.

These optimizations also come at a cost:

To reduce the costs, an attacker might combine these attack vectors: for example, tune the fees of jamming payments so that they jam a specific channel.

The following topics look to us as a natural next step towards better understanding and combating channel probing:

We would be excited to see explorations of specific applications of probing, e.g. payment flow inference, built on top of this work.

It’s important to better understand channel probing because it’s a real privacy threat in the Lightning Network. In this work, we advance this understanding by considering parallel channels. We describe how an attacker may extract information from them using various probing techniques. We also suggest ideas for combating probing attacks and demonstrate their efficiency, while also noting the shortcomings they introduce. We hope to see community discussion around these trade-offs.